Silver is a trace element indispensable in maintaining a healthy body, especially in the internal secretion glands, the brain, the liver and bone tissue. It has been widely known for its therapeutic and antibacterial qualities since ancient times. 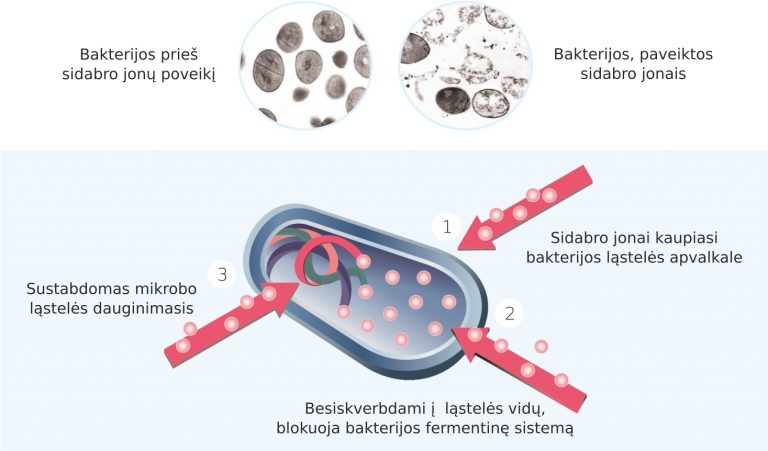 The usefulness of silver as a disinfecting agent was proved in the nineteenth century with a number of successful experiments. In 1893, Swiss biologist C. Nägeli discovered that some metals, including silver, display their bactericidal qualities when they are dissolved in water. Later research, especially the work of Russian academic L. Kulsky, confirmed the findings, and concluded that it was the silver ions and ionic compounds that actually killed pathogenic microorganisms. More importantly, research found that as well as fighting agents of disease, silver also eliminated the toxins they produced. Note that the bactericidal action of silver does not affect intestinal microflora, which makes it safe for internal use.

Silvered water is water enriched with positive silver ions, giving it distinct antibacterial properties. Silver ions move towards bacterial cell walls and, being smaller in size, find their way inside with ease. Once inside, they disrupt the synthesis of bacterial enzymes and proteins, thus killing the entire microorganism.

However, the impact of silvered water depends on its concentration of silver ions, which is measured in milligrams per litre (mg/l). The greater the concentration, the stronger the bactericidal impact on almost all microorganisms and the quicker the action.

Silvered water has the exclusive ability of inhibiting viruses and funguses as well as bacteria. As a natural antibiotic, silver affects more than 650 species of microorganisms, whereas regular antibiotics affect only 5 to 10. Scientists have not identified any bacterial adaptation to the antimicrobial action of silver.

Advantages of the aQuator water ioniser with unique silvering function

Our forebears used silver dishes, cutlery, coins and other items for the purposes of prophylaxis and disinfection of water. However, their silverware was made of various alloys rather than fine silver. Toxic metal admixtures passed into the water along with the silver, thus reducing its quality and even causing adverse effects to those who consumed it.

Advances in science and technology mean that we have travelled far past these primitive water silvering methods. Today we are proud to introduce a new, efficient and safe domestic appliance with a unique water silvering function. The aQuator water ioniser uses electrolysis to produce an exact amount of silver ions from a 99.9% silver nugget that comes in the form of a special attachable electrode.

Tap water or any other type of drinking water is suitable for silvering. However, research has shown that the excess of chlorides and sulphates often present in tap water reduces the bactericidal action of the silver ions. In contrast, thebactericidal action of silver is stronger in alkaline water (pH = 8-9).

With an aQuator water ioniser you can take advantage of the properties of both types of water for the best results: the ionised alkaline water production function and water silvering function are ready to be used one at a time.

Conditions of Use and Sale

Any cookies that may not be particularly necessary for the website to function and is used specifically to collect user personal data via analytics, ads, other embedded contents are termed as non-necessary cookies. It is mandatory to procure user consent prior to running these cookies on your website.